Do you really want to see the Mannekin Pis's sister? 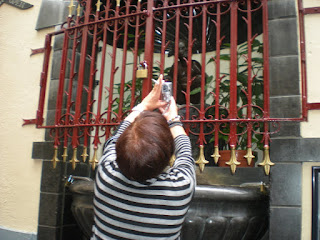 One of my favorite pictures of a tourist. She is trying to get a close of the statue while smoking a cigarette. Hope she does not burn this landmark down. Hehe 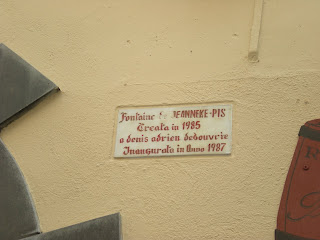 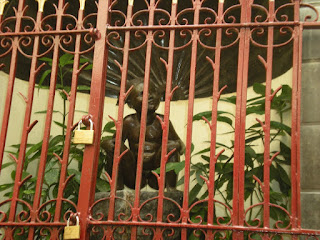 And the squatting pissing girl. Not sure why she is under lock and key. Could someone really want to steal this statue?

Anyone who reads my blog, knows that I mention the Mannekin Pis quite often. In a lot of ways it is Belgium's symbol. I am not sure why a country would want to adopt a little boy pissing as their "national symbol." If anything Belgians should try and find some other "tourist" landmark that draws flocks tourists. It is quite a sight to see tourists snapping away at the pee pee boy. You almost get the feeling that these tourists are snap happy papparrazi. I admit that when I visited Brussels years ago, the Mannekin Pis was our first stop. Then the chocolate museum and after the beer museum. Classy and cultural destinations. Since these were all at Grand Place, it made sense. Pretty much that was my first exposure to Brussels.
I never tire of the Mannekin Pis because he is so absurd. It really says something about a country when this little bronze statue is everyone's first stop (me included). If you visit any touristy shop you will see souvenirs modeled after the Mannekin. My favorites are a life sized version of the statute that would look so classy on your desk at work. Imagine talking to some really important clients and offering them some water from your own Mannekin Pis's peepee. A class act. If that is not a deal break don't know what is. Also there are these cork openers where the spiral thing used to open corks is actually the Mannekin's penis. Very phallic and a great souvenir for your mother-in-law.
This past Sunday, I sunk to an all new low. We went to Grand Place to see the flower carpet (which was not up as of this past Sunday). On a whim, I decided that I wanted to pay homage to the Mannekin Pis's counterpart- The Anneke Pis. Trust me, I am not that creative to make this up. There is actually a female version to the Mannekin Pis. Something to do with gender equality.
Believe it or not but there were some tourists there snapping away. I was pretty revolted as I watched the bronze statue of a little girl squatting and pissing. Pretty classy. At least, she was semi- modest as she was found down some random alleyway. What amazed me was that this statue was literally under lock and key. I can not even imagine who would want to steal a squatting girl! Any way I took my obligatory picture for this blog and decided never to visit this landmark again.
Posted by Melissa at 11:27 AM

Melissa
I am an American expat living in Brussels. This blog is all about my observations, rants and bashings about life in rainy Belgium. And I occasionally drink and review Belgian beer!!